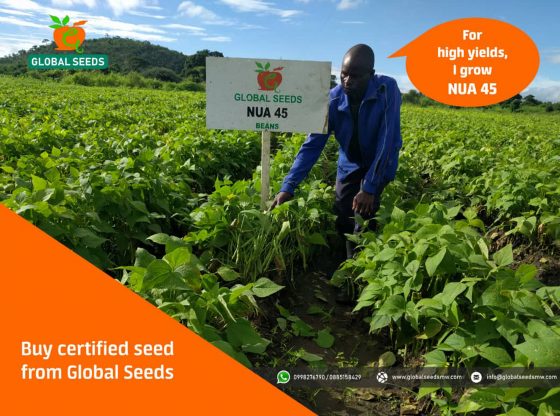 Global Seeds Limited, a Malawian-owned company established in 2012, has introduced new seed products aimed at improving crops in the country.

“We are also distributors of vegetable seeds like tomato (Tengeru), rape (English and Giant), cabbage (sweet loaf), mustard and green pepper,” he adds.

The company supplies quality seed to local and international organisations such as Pyxus Agriculture Limited, One Acre Fund, Total Land Care, Malawi Government and United Nations Food and Agriculture Organisation (UN-FAO), among others.

Just like other local companies, Global Seeds Limited has greatly benefited from the Buy Malawi Strategy (BMS) through promotion of their products in different media, including radio, newspaper and social media.

“Our brand is now recognised within our target markets and our sales have increased. We have also benefitted by attending BMS events and showcasing our various products and meeting potential customers,” he says.

BMS is a good initiative for local businesses that play a significant role in changing the mindset of people in the country.

More people are now aware that there are also good quality products being produced in the country.

BMS is also promoting locally-made products though advertisements and is also helping small companies to compete and reach big markets.

Much as BMS is doing well in boosting local businesses, Chibwe points to things which need improvement such as subsidising companies on their product promotions strategies such as billboards and media adverts.

Chibwe also says the initiative could help in branding locally made products with BMS logo.

Additionally, they can promote business to business and partnerships within various members and organisations under the Buy Malawi umbrella