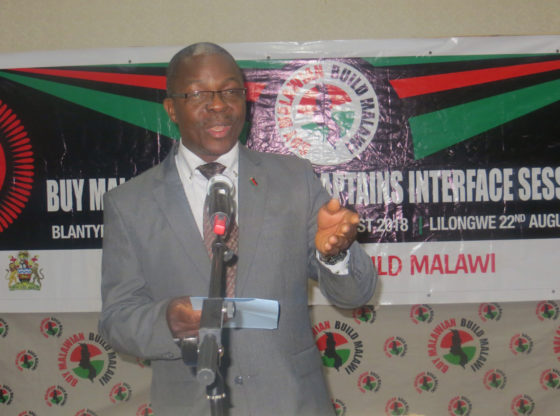 In his address at the third Business Captains interface in Lilongwe, Dr. Ndala said at least 38 of the reached companies were currently in the processes of completing their membership application process while seven have completed and paid membership fees.

He commended the private sector for embracing the strategy as demonstrated in the warm welcome the secretariat staff received as they visited respective companies in the past two weeks.

“The response we have gotten so far from the business community in the two regions confirms the notion we have now and again echoed that this initiative is supposed to be private sector driven,” he said.

The Lilongwe interface followed one in the Blantyre and Mzuzu at the end of which at least 75 companies had been reached. Some 31 companies patronized the Lilongwe event making a total of 106 out of which 40 are now completing their registration process.

In his remarks, President of the Malawi Confederation of Chambers of Commerce and Industry Mr. Prince Kapondamgaga, echoed the need for the private sector to embrace the strategy and government to continue engaging with manufacturers.

Mr. Kapondamgaga also emphasised that involvement of all key stakeholders is key to the success of the strategy and that there was need to maintain the momentum for quick wins.

In a questions and answer session at the Lilongwe interface business captains reiterated the need for government to ensure a conducive environment including bringing strategies that would lower cost of doing business.

The BMS is aimed at increasing consumption of locally produced goods and services and ensuring improved quality.

There are several benefits accruing to paid-up members including the use of a gazetted BMS logo which authenticates products and services as Malawian.

Share on:
WhatsApp
Buy Malawi Secretariat in Private Sector Recruitment Drive
Buy Malawi to get a boost through rural industrialization